Last week I noticed a dramatic spike in sales for many of my less popular items, like the Coexist Idiots bumper-stickers, Union Sq matchgame postcards, and especially upped sales for the Mohammed Dressup fridge magnets. I certainly notice when those start flying off the shelves, because they’ve resisted it for many years. Well, I found out why this was  happening for the Mohammed magnets. There’s a store in Hollywood California called Soap Plant Wacko (permission to mention them by name granted) where I sell the Mohammeds through. This store has been one of my all time best customers for 6 years now. When they first heard I had the Mohammed sets available (in addition to the Jesus Dressups they’d been buying), Billy didn’t even hesitate to get them along with everything else he buys from me. 100% of all other stores who order from me do not request the Mohammed sets. No judgements. Just fact.

Yesterday I was told where this extra publicity came from. Seems that the artist who won the Draw Mohammed Contest in Texas where that shooting took place last year, Bosch Fostin, saw them at Wacko. He was both shocked and impressed. He took a picture of them at the store and posted them on his Facebook page giving kudos to both me and the store. “Someone gave me the head’s up that this is being sold in an LA store. I imagine you would have thought this impossible. I did. But it’s real. It’s freedom.”

His post sparked a lot of comments, shares and direct messages wishing me well and telling me to be safe. Now, I’ve had mohammeddressup.com up for over ten years now. Posted back in 2006 I’ve never felt under threat in any way since doing so. For the record, I’d been drawing Mohammed in comics and games before that as well, trolling for hate mail you might say. Not to say I didn’t get my share, and even death threats, but I’ve gotten way more of both those things from Christians for Jesus Dressup. Never once did I feel like there was an actual threat to be worried about, except that time the Prophet Mohammed himself chopped off my finger. Satan was there to help me with that recovery, though.

Now I’m realizing not everyone has seen all the letters I’ve received. I thought this might be a perfect opportunity to rally together the Mohammed ones and put them on display. Here are those emails which led to nothing more than another email from who I think it’s safe to presume are ornery and confused 15 year old boys.

And finally, these from India were written in Hindi and translated by an Indian friend of mine. I cracked up rereading these because they’re exactly the sorts of messages I get when I play GTA V and shoot someone down in free mode.

Now I’m not one to brag, but after going back through Brian’s and my 2006 conversation I’m impressed with my responses. I didn’t remember it being this good!

Luke’s email to me from 10 years ago… 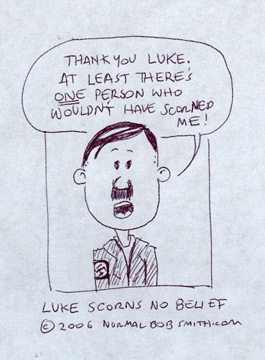 Hitler: “Thank you Luke. At least there’s one person who wouldn’t have scorned me!”
Luke scorns no belief
© 2006 normalbobsmith.com

As my longtime viewers & fans already know, I have a long history with complainers. Hell, the first 10 years of this site were dedicated to hate mailers. I’ve gotten those who pledge to never purchase my products again, ones who mercilessly insult my talents, and even some who threaten my life. And though the trend of complaining via email appears to have ceased, it has really only shifted mediums. Now it’s YouTube comments. People sometimes HATE what I shoot! They’re disgusted with my complete lack of knowing what a proper Public Freakout video is, or sometimes it’s my own opinions being so upsetting that they have to make their statement by typing “UNSUBSCRIBE” and I assume, very purposefully doing exactly that. Such is the case with one of my most recent videos that’s getting thrashed in the comments.

I don’t think people realize that the videos are for me. Beyond that there’re for the people at the Square. After that it could be argued that they’re for New Yorkers. But beyond that you’re on your own. Unsubscribing means nothing to me. Complaints, insults, thumbs down, they all will not effect what I’m going to do. I figured out over a decade ago that you just can’t let people’s complaints about what you’re doing change you. Not if you yourself like what you’ve done. And I definitely do. I rewatch my videos again and again, year after year.

On the flip side of that however, I do love reading the discussions when other commenters stand up and defend my position (their own too, I assume). They do a far better job of explaining most the time than I ever could. Thank you for that. You know who you are.

While I’m on the topic, I’ve only just now gotten an iPhone. My first smartphone. No joke, I had a flip phone up until last month. But I knew if I was going make my living off the internet I had to get with the times. And already I’m on it way too much. I’ve put off getting one for so long because since I got my first laptop back in about 2005 or so I knew my problem would be not being able to get away from the net. And that goes tenfold for this phone! I don’t want to be in constant 24 hour contact with every update in my friends lives while they’re somewhere else! In fact, I’d go so far as to say I shouldn’t be! We shouldn’t be! Things are just fine with me catching up on this information at the end of each day.

Don’t get me wrong, if something’s happening that’s important they can call me anytime. But being caught up on every funny video Liked, each political viewpoint they agree or disagree with, what they’re having for lunch, or the celebrity they resemble most, I don’t need to be up to the minute on. That’s not catching up on your friends’ lives. It’s items of the lowest priority. It’s meaningless. It’s masturbation. And it’s me too. I put myself, along with everybody else as not having an evolved enough brain to deal with this particular technological advancement. And this is not the first time I’ve declared my position on this issue.

One of the commenters (Stephanie Lovecat) put it perfectly:

“You people are missing the point.
I get that you think Normal Bob isn’t doing anything but the same thing as one of these Scrollers, but he’s doing a service to us more than him.

On this channel we’re seeing tons of life perspectives. We’re getting a unique glimpse into people’s lives. YES, we can get that on Facebook as well, BUT these are live videos. We can see and hear authentic movements and audio coming from parts of the world 99% of us are not from.

Facebook scrolling isn’t doing anything for us but filling us up with 20 million different emotions and perspectives at the clock of seconds. There’s nothing to gain but overwhelming senses that result in us sitting on our phones with our mouth open, thumbing a screen up and down.

At least Normal Bob is showing us substantial evidence that this virtual reality we seem to be living in the 21st century, isn’t the only fucking entertaining thing in this world. We’re not all technology zombies. I prefer Youtube over Facebook anyday. Videos are a special thing…”

But from what I’m hearing this opinion is typical hipster bullshit, end of discussion.

So to all of you who get what I’m doing, I appreciate that you noticed. All others, please don’t feel obligated to stay subscribed. You might be at the wrong channel. Unless of course you enjoy regularly complaining. Then by all means stick around and upset yourself.

Here’s some of my most recent photos.