It’s that time again when I haven’t updated long enough to finally get an email asking if I’m still doing the site and/or selling Jesus Dressup magnets. The answer’s yes. Plus I’m also selling Trumps & Mohammeds as well. Can you think of anywhere else that combo of themes is available??

In total I have 8 different sets of magnetic dressups available all to be shipped in time for the holidays. Be warned- I’m opening my final box of Lady Gaga Jesus Dressups (40 sets per box). So get yours now, because those won’t be printed ever again.

At the moment I believe I’ve posted the last Amazing Strangers video for a while. You can see all of  the latest ones there in the right sidebar. There comes a time when I just can’t seem to find anything worthwhile enough to edit. But that could change at any point because I am indeed working through all those folders preparing a paperback book which’ll be stories & art, but mostly photos of Union Square Amazing Strangers.
My local bookstore/coffee shop Book Nook has offered to print it up for me through their publishing company, West Vine Press here in Whitehall. Then later this winter I’m planning to host video presentations here at the shop. We’ll see how that goes. I’ll be sure to make the book available for purchase here on the site.

I’ve yet to get any offers on a place to stay in NYC to encourage more frequent visits. But I do have a friend willing to rent me a room for a month in May. If it’s still available to me by then I’ll be taking her up on the offer. That’s when you can expect brand new, current footage added to youtube.com/normalbobnyc.

In other interesting Amazing Strangers news, my friend Nick (New York Nico) back in 2014 purchased one of Roman’s signs for a dollar, and has since had it framed! It’s now hanging in his hallway, and I thought you all might like to let your envious eyes lay upon this lovely piece of art.

They’re HERE! They’re HERE! My Batman Jesus Dressup fridge magnets are in, and they look AmAzInG! I have to be a little sly in, but I think this’ll cut it for now. Just look for it under the name Joker Jesus.

I have zero reservations about creating these. It’s my art. It’s my favorite Batman characters from each era brought together in one zone for the Caped Crusaviour. It’s hard for me to express how satisfying it is to have it in hand like this. It’s my baby. 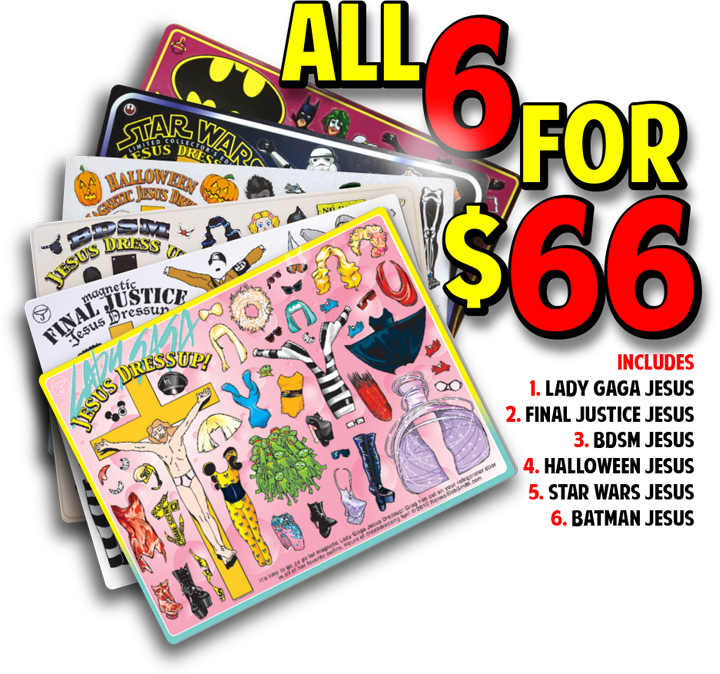 That’s 6! And you know what that means? That means you can get all 6 for $66 while supplies last. I just love it when things work out so poetically like that. Sooooo satisfying just on its own. No sales even necessary. Which is a major flaw in my thought process I suppose. But there you have it. Just in time for Easter. And if you are a store, or know of a store which would carry any or all of these, please don’t keep it to yourself. Contact me and I’ll be delighted to send you some! Because next week I begin the process of mailing out samples to stores, making phone calls and fulfilling dreams.

UPDATE: Sept 25, 2016 – The Jesus Dressapp has been deleted from Google play, but is available, uncensored here at Evil Apps.

Anyone who’s followed the Jesus Dressup app story for the last 6+ years has witnessed the constant struggle to get it & keep it available to the public. And there’s a story to go with each desperate attempt made. 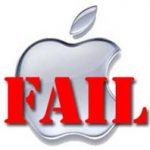 The first big attempt was in 2010. A fan of the site from Scotland came to visit at Union Square. He offered to make the app for iPhone. He’d mentioned it when we met, hung out a few days without talking much more about it. Then I happened to be walking by him on Astor Place the day he was flying back home and he shouted from the distance, “Do you still want me to make that iPhone app for you?”

“Sure! Go for it! Just put a link to the fridge magnets on it and it’ll be worth it to me!” I shouted back.

Knowing it was a lot of work to make, in haste I said, “If you can put a link to my store on it it’s yours to do whatever you want with!” Or something of that nature.

Many months passed and I had already forgotten about it. Then low and behold he messages telling me it’s done and ready to go. I was impressed.

The next step was getting it approved by Apple itself, which much to my surprise they did! We were both visibly shocked and excited.  Unfortunately, the other thing I was quick to find out was he’d made the Apple account entirely under his name, and all purchases of the app were going to him. I’d been shut out of it completely. And there wasn’t even a link on it to promote the magnets I sell.

I called him and explained how this wasn’t an acceptable setup. He immediately got defensive, saying “You said I could have it if I made it!”
After several more minutes of angry words I told him if he doesn’t change the situation fast I would contact Apple and tell them he’d stolen my product and have them take it down. He yelled back at me “Fine! I’m taking it down myself!” And hung up on me. It was removed seconds later.
Then this guy from Krapps emailed me wanting the full story…

Attempt #2 happened about a year later (2011). Inspired by the acceptance by Apple from the previous attempt I started asking around for possible programmers. Having an iPhone App appeared to be a venture that could be quite lucrative. This time I’d pay someone to make it again, and I could have full control, beginning to end.

A friend of mine from Union Square, one of the skateboard kids I’d known since he was 15, was now going to school for programming. He was happy to figure out how to make an iPhone app while getting paid. It took the better part of winter 2010/11 and a lot of headaches, but after several months we had our iPhone App ready to go. We submitted it to Apple, and about a week later they rejected it. I tried to appeal the rejection but they didn’t care. I belly ached to them how they approved it a year earlier when it wasn’t me who submitted it, but they stood firm. “Too controversial.”
It was spirit-breaking.

In an amusing side note, below is the image they sent us with the rejection letter. And yes, someone on their end had to dress him up like that before concluding it was too offensive for Apple.

Anyhow, this particular rejection really took the wind out of my sails for a Jesus Dressup app any time in the near future. Having it approved for the guy who stole it, and rejected after putting so much time and money into it was the deathblow. Tom and I parted ways, and I didn’t feel like getting into app making ever again.

Then in 2013 I was contacted by a Facebook friend who said he wanted to make the Jesus Dressup app for Android. Let me say that he was making a very generous offer of doing it for no charge for the experience, and credit on the app itself. I warned him of the troubles in the past, the difficulty & time involved in making it, and the very real fact that it’s probably not worth it financially for either party involved. Still, he offered to do it while in school, for no pay.

A year later the progress had been minimal and I realized again, it was way too big a job to be worth doing at all. I seriously don’t know how making these free apps is worth it for anyone.

Finally earlier this year, around March, I was contacted by another Jesus Dressup fan from Italy, offering to make the app for Droid. I did the usual “It’s a bigger job than you think, and afterwards it’ll be rejected for being offensive” speech. But as long as his name could be credited for making it he was willing to give it a shot, no charge. He sent me video of how it’d play, and several months later it was done. That was last week.

Playthrough of the 2016 Jesus Dressapp for Android

It has almost every version of Jesus Dressup I’ve ever made included, it’s FREE, and it even has a link to my fridge magnets in it!
I have an iPhone so I haven’t played it yet, but after watching the play-through (above) I really wish I had a Droid instead. And the reviews it’s getting are astounding! 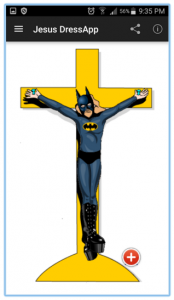 “Even more fun in app form!”

“I have the magnet set, but now it’s on my PHONE! No more carrying my refrigerator around wherever I go”

“Even more fun on app form. I love the magnets so the app is even better! I love the villains option, it’s my favorite! Easy to use and fun.”

So race to Play Google, download it before it’s deleted again, pass the link onto friends and write a nice review before I’m writing about the Jesus Dressapp 5th Attempt!
Just click on the link below. And if that one’s been deleted you can always get the completely uncensored one here at Evil Apps. 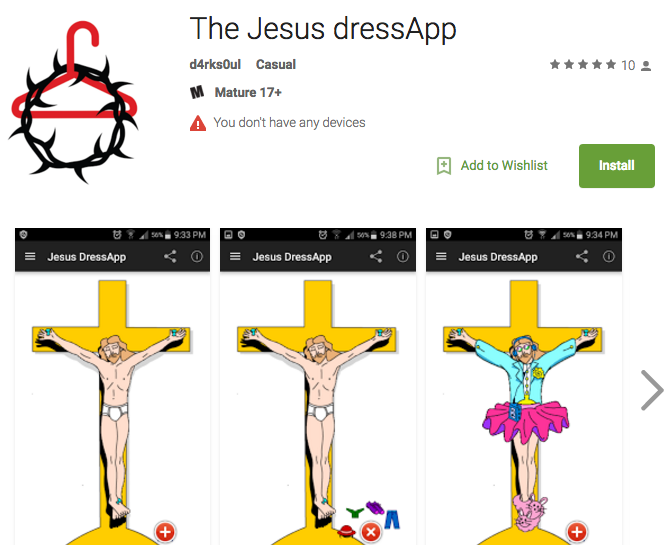 You want more hate mail? You got it! Straight from this week’s mail pile to your living room. A lot of questions and a lot of answers, and Lady Gaga Jesus gets the ball rolling.