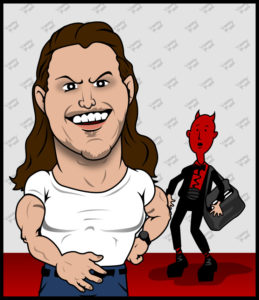 As many of you know I used to dress up as the devil and walk around the streets of NYC. I did this off and on from about 2002 to 2010 or so. The last time dressing up being for a booth at the 2010 ComicCon to promote and sell my Jesus magnets. The excuses I’d use for getting into the devil-drag were to hand out GOD IS FAKE flyers and promote the site, clubbing with friends, I even went on a few dates where she would dress as a catholic school girl. But most often I’d get dressed up and go out  just because it was a really fun thing to do. Lots of fun.

On this particular evening in March of 2009 it was because my friend Lenora Claire said she’d be in town that evening for a fancy celebrity party, and I was invited. It was an event put on by Vanity Fair and the USA Network to promote a book and television show titled The Character Project. There’d be celebs, free food and booze, but she couldn’t get me on the guest list. She was sure however that if I arrived in full Satan get up I’d be let right in. It was, after all, an event dedicated to interesting “characters”.

My outfit was your basic devil in a tux look. A somewhat dated tuxedo with a red ruffled shirt and black cumber bun, platform boots that zipped up the side. The tux itself was a couple sizes too small for me. I had no beard and my head completely shaven so I’d paint it all completely red with clown makeup, affix a couple homemade horns to the top, some black eyeliner and lip-stick, and that’s exactly how I did it for about 8 years.

For this particular occasion I had a plan. I was going to bring along plenty of God Is Fake flyers to hand out and leave on every blank surface I saw. I’d also bring along several variations of my magnets to try and push on unsuspecting guests. Push them much in the same way one might sell counterfeit designer purses on Canal street.

It was all taking place at this haughty studio in the West Village. If you’ve ever walked by some artsy celebrity event in the Village you know what I’m talking about. They can be intimidating. Velvet ropes, paparazzi, limos, crowds of well dressed rich looking people. A literal red carpet, and very heavy security. I remember approaching this scene thinking to myself, “There’s no way they’re letting me into this place.”

The most intimidating part of it all were the two fancy women at the door with a clipboard asking questions and checking names. But when I got to them their eyes lit up and the one with the clipboard said “HELLOOO Mr. Devil!”

“Hi, uh, I’m a guest of Lenora Claire, and uh she said to just come down and uh, she’s expecting me?” But before I could keep on explaining she gave her list a cursory glance, unhooked the rope and said “No problem! Come right on in.”

Still in explaining mode I was totally unprepared for the wall of flashing cameras on my left. It was an actual line of paparazzi, like 20 or so photographers shooting hundreds of pictures non stop. I hammed it up as much as I could for them, but I also I remember hurrying through because I saw more important looking people behind me waiting next. Here’s one of those photos, I guess now owned by Getty Images, if you’re interested.

It was an impressive party. Waiters milling around holding trays of cookies and ham & cheese on toothpicks. I saw Lucy Liu and Jeff Goldbloom there who both looked at me like I was a stalker they had a restraining order against. But don’t get me wrong. At events like this people actually come up and talk to you. Pretty people! And they have big smiles on their faces! And they’re friendly to strangers and everything! It’s something I wasn’t at all used to when going out in the city. People were approaching me wanting to know who I was with, and which part of the show I was a part of. I would tell them flat out I wasn’t on the guest list and I just came in off the street. I would ask them if they wanted to see some of the stuff I got, and let them peek in my bag and show them my stash of blasphemy. They generally got a positive response. There were a few who were aghast, but for the most part the guests loved them, and me. If they were receptive to the Jesus magnets I’d say “I’ve got others, but they might be more than you can handle.” Then I’d show the Final Justice & BDSM versions acting like I’d snuck a bag of hand grenades into the building. After awhile word of what I was doing circulated and guests would come asking to see whatever it was I was doing.

At one point this heavy metal looking guy came up to me. He looked like just some stoner dude tagging along with his hot girlfriend. I forget exactly how he put it but he made it clear someone had told him to come see what I had in my bag. I remember giving him the flyer and he loved it. So I followed that with a set of the magnets. He guffawed with laughter and said “You’re selling these??” He did not hesitate to buy one. I still remember him and his girlfriend walking away admiring them, but I have to admit I cannot for the life of me remember which set they purchased!

At the time I knew three things about Andrew W.K.
1. He did that I Love New York City song and it would get stuck in my head if I thought of the title, as has happened just now while writing this.
2. That great album cover of him with blood gushing down from his nose.
3. He played all the instruments and vocals on the album.

Afterwards Lenora told me she saw Andrew W.K. walking around with my magnets and that’s when I realized who he was.

I didn’t see him again that evening, and I did laps around that party until my feet hurt and my legs were aching. Upon my exit I couldn’t believe the expensive gift basket they gave me filled with wine & cheese, the $80 photography book they were promoting. All kinds of other pricey things you wouldn’t buy for yourself, but you would gladly take for free.

That was one of the last times I ever dressed up as the devil. Not long after that I grew out my hair, and beard, and it just doesn’t have the same effect.

So anyway, that’s how I sold a set of my magnets to Andrew WK and didn’t even know that I had.

I’d like to introduce to you all, the magnificient Super Chic Lenora Claire!