So here’s the story. You know page 54 of Amazing Strangers? The one with the skater guy and above him it says “ANATOMY OF AN AUTHENTIC SKATEBOARDER” Well, on Friday I made a flyer out of that to give to skaters, and Skater Bob had said that it’d be totally hilarious to pass those around Union and wherever else he might be skating. This is what it looked like.

We’ve been handing them out all weekend, and some skaters got it, some thought it was “bullshit” and threw them out, and a lot more just didn’t want to read them or whatever. But over all most people laughed and thought they were hilarious. I musta handed out 150 of them between me, Skater Bob and several other skater friends.

So this evening I’m sitting there at Union and my friend Greg (18, but looks 15) told me that he’d handed them all out and he needed more because people were loving them. I gave him another stack and he rolls over and gives them to some other friends of his, then out of nowhere comes the guy who’s actually THE GUY featured in the flyer, and he sits down on the steps between me and where Greg is handing them out about 30 feet away. Let me clarify here that when I took that picture that was the first time I’d ever seen him anywhere, and him walking up this evening was the second time I’ve ever seen him! And it’s so obviously him! He’s got the longboard, same pants, and face and everything! And Greg, without even thinkin’ just hands him one because he’s got a longboard. So I motioned for Greg to come over and I tell him “That’s THE guy!” And we both start laughin’!

Now, the guy’s holding onto it but hasn’t looked at it yet because he’s chattin’ away on his cellphone. He’s just sittin on the steps holding the flyer in his left hand, and the phone in the other.

Then he hangs up the phone and glances down at it. He must have starred at that thing for like 15 minutes, front and back, then the front again! Then over each shoulder and back at it again and back over each shoulder looking for whoever it was who’d just handed it to him! Of course Greg was crouched behind me thinking he was gonna get his ass kicked or something. Then the guy picks up his cell phone and starts reciting the flyer to whoever’s on the other end. 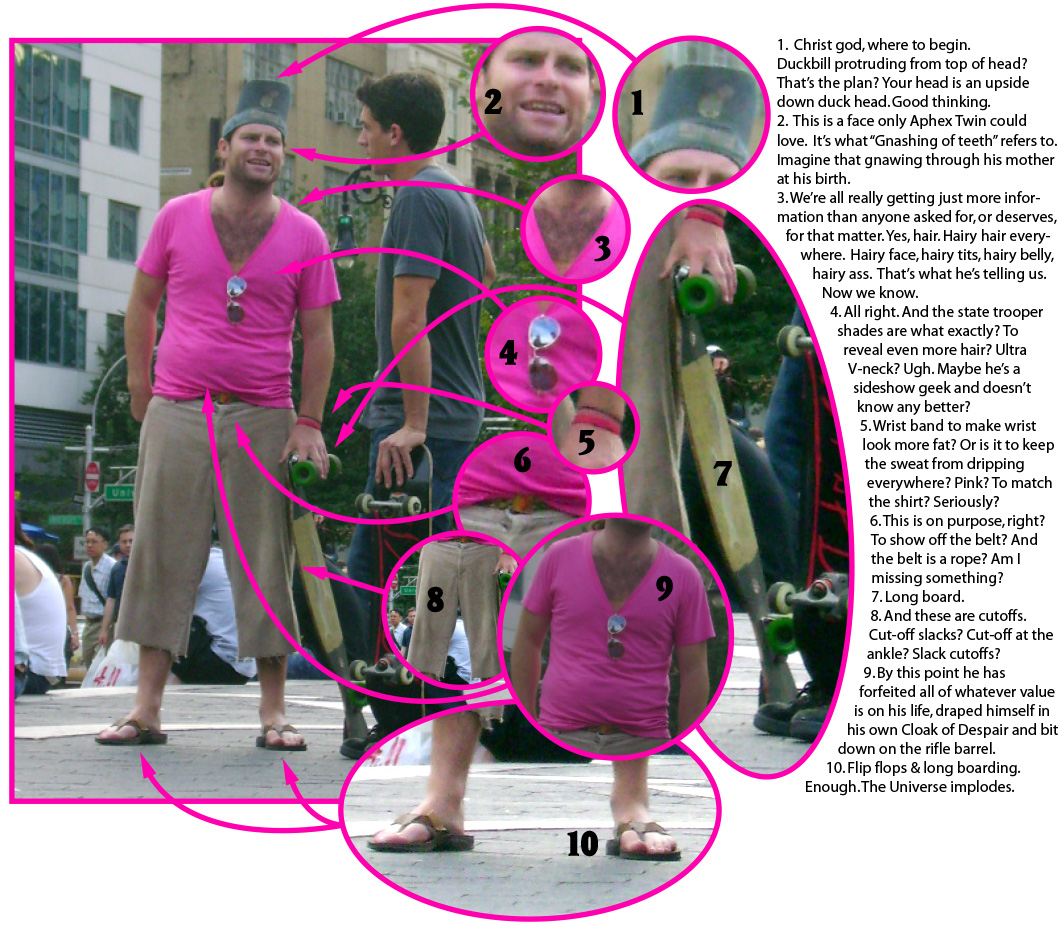 So I got up and went and sat right next to him so I could get the whole story, and he of course doesn’t know who the hell I am. And he keeps reciting it: “Flip flops. Every NYC skater knows this. It’s so basic. If you’re skatin’ you’re wearin’ your flip flops. A no brainer! I don’t know! They mustuv taken the photo last week! No dude, IT’S ME! I AM ON THIS FLYER AND IT’S MAKING FUN OF ME!” Like the person on the other end wasn’t grasping the full picture as of yet.

So then he gets up and walks a few steps over and starts asking the other skaters if they know who’s handing these things out, waving it around and shit. It was funny too because they all had them as well and they all knew it was me just sitting there a few feet away. But none of them are snitches. They just said, “I dunno. That’s you? Heh heh, I wouldn’t be shouting that so loud. Heh heh.” like they were kind of embarrassed for him. Then he’s on the phone again sayin’ that he’s gonna scan the park and find the kid who handed it to him, but Greg had long since skated away into hiding. Towards the end he did say “I dunno. I’m kinda honored to be on this, you know?” Couple seconds.. “Some guy called Normal Bob Smith. It looks like he takes pictures of people at Union then uses them to promote his site. All I know is I’m going to his site tonight!”

And he got up and walked away with his longboard in hand.

It was a really fun thing, as you can imagine. I love making shit happen like this. Makes life much more interesting than just sitting around.