You may have noticed it’s been a couple months since I’ve updated anything at all. I know I’m not the only one suffering the effects of what’s all going on with the state of affairs right now. Stores have stopped ordering magnets, online sales have dropped dramatically, and having my NYC art showing cancelled was a difficult pill to swallow. On the personal end of things, my social life already adds up to a big fat zero. Now, with social distancing in full effect out here in the middle of nowhere the loneliness and lack of love is tenfold. Soooo you can bet I was more than excited to have an opportunity to talk with a couple friends on their podcast!

Here is the interview with Sari & Alissa on SoulHouzz. We discuss the Pray For Satan exhibit, how I lost my faith, some of my adventures in NYC as Satan, and going to see The Passion Of The Christ. This isn’t going to be the last interview I do with them either. This is part one of a two part discussion.

Lastly, I haven’t felt creative or able to find the will to draw since this pandemic began however many months ago. Only in the last week have I been sketching again, trying to find hope. I’ve  turned down art jobs because I just could not do it. It’s hard to explain. I get in my own head, over-think everything, then escape every evening at 4:20, if you get my drift. That, my friends, is the pattern of my quarantined day. Is there a way you can maybe help me out of this funk?  Help me promote this interview, or the Jesus magnets, or the art exhibit! Share them on social media with your friends or anywhere! I want very badly to get the ball rolling on life again, but lately I’ve felt completely inept at doing so.
Thank you for reading this all the way to the end. You’re my favs.

I’m trying really really hard not to begin another holiday blog with “It’s that time of year again!” and it ain’t easy, but I’m up for the challenge. 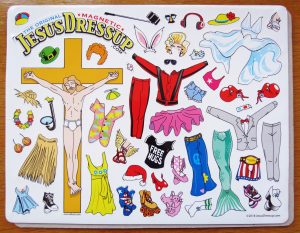 Anyhow, it’s almost that time of year again so I need to remind everybody I’ve got fridge magnets available! Six different versions of Jesus Dressup, a Trump and even some Mohammed ones still sitting around. So if you want to surprise your loved ones with a healthy dose of blasphemy this Christmas I’m over here with the solution. I have 6 versions of Jesus Dressup to be gotten for the twisted price of 6 for $66! I’m down to the last 200 of the Trump magnets so my guess is that the time on those is about to run out, if you get my drift. And the same goes for Mohammed.

Also, if you think there’s a weird little kitschy store in your neighborhood that doesn’t but should sell any of these please contact me somehow with their name and location and I’ll give it my best shot. For that I thank you!

I ALSO have a brand new suggestion of a possible gift for the season that no one asked for – Signed art prints by me.

I have chosen my favorite 15 works to make available for purchase. Ever since I started drawing with any sort of seriousness, my goal has been to make art I’d want to hang on my walls. Things I want to hang up with the style, colors, emotion and subject matter that I can’t seem to find anywhere else. Then afterwards completing that quest I’ve printed, matted, framed and hung them on my walls, just as planned!

Spending my time drawing these portraits has been what’s keeping me sane. I’ve been away from the city for 4 years now, and out of the handful of solutions I’ve tried to evoke for leveling my head, drawing, as usual, is the savior.

Now having just discovered a printshop here that does such a beautiful job, this was clearly the next step. It’s been inspiring too. It’s inspiring me to draw more, tweak my skills, take more chances and even find venues where I can show them off, both locally and even in NYC. Stay tuned for further details on that.

Oh, and always remember, God Blames Us.
Happy Holidays everyone.

Remember back in the day when I used to start off blogs with “So much has been going on to tell you about!”?  Well, things have changed. It’s been since June I last updated and even in those 4 months not a lot has happened. I’ve got a few art projects completed, Jesus and Trump magnets are still available, although the pile of Trumps is down almost to the end. Sales have been slow online, but the group of stores I sell to across the states are ordering some of everything on a consistent basis. And you should too!

Drawing pictures of the prettiest people is what’s been dominating most my creative time lately. First, the Gigi Deluxe Dressup game is completed and available for play on your phone!

So many sexy outfits! Go  see for yourself! There’s no end to the hot combinations of spears, sparkles and spectacular cleavage to enjoy!

Now Jake has made it clear to me that he always wants me to draw pictures of him no matter what. It’s a request I’m happy to oblige. I swear I’ve done so many drawings of Jake I could do it now without reference. But in this particular instance I was challenged to see what Jake might look like as a bodybuilder. And what I thought might be a struggle turned out to be one of the quickest successes I was able to sketch out in no time flat! The final result, in my opinion, is absolutely spectacular! I think some of you will completely agree.

Finally, I just completed this adorable portrait of the friend of a friend. More accurately, the hairdresser of a friend – Alex. I’ve been finding much contentment spending time on these projects. I’ve included the sketches for these latest pieces as per your request. 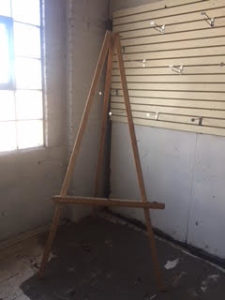 Okay, let’s be honest. I am here all alone. I mean, I have an 85 year old mom, and an 87 year old dad, and a 5 year old dog that I adore. But this is the extent of my social life. It really is becoming an issue, being stuck in my own head to such a degree. I know I chose to do this, and I’m going on 4 years now, but it’s feeling like I’m sinking.

Where I’m at here in Michigan it’s very very Christian. Everyone you meet says they’re Christian. A common line people ask when first meeting you- “What church do you go to?” And saying you’re not Christian draws a response of stunned silence. That’s okay by me, but it’s one of the several reasons I am without company. If I had even one other person around me to talk to about these things it’d make all the difference. But I do not. And I don’t see that changing anytime in the near future. I had a hard enough time meeting people in a crowded like-minded city. Here I see not a glimmer of hope. Mom’s saying she’s praying I’ll meet someone.

I’m being harshly reminded of how willing my brain is to take me to dark places. It likes to focus on hopelessness, loneliness, and my almost certain future without love. I’m not sure why a brain wants to do this or how that helps at an evolutionary or survival level. I’m sure too the fact that I’m turning 50 in June isn’t helping me subconsciously either. Then, obviously all of this wreaks havoc on my inspirational levels to boot. Maybe though it adds to the fear levels for their motivational purposes? That’s what they say. “They” being my defensive head voices.

Something else no one wants to talk about is how isolating it is simply being a grown single man. A grown single man is almost always firstly suspected of being a creep. I know this all too well from my years at The Square. I completely get why men are seen this way. I get it. But that doesn’t make it any easier to live with daily. Being made to feel like a creep is my #1 deterrent from attempting to meet anyone.

I’m not just laying down dormant and accepting this fate my brain is promising. A couple weeks ago I found a cheap studio space to rent so I can paint. I saw a handful of YouTube videos of different guys saying “Painting saved my life!” and I thought, “My life needs some saving too!”

I’m starting very basic with it since I’ve not painted since art school. But now I want to do it. And I feel like I have the patience, maturity, and desperation to really give it my best shot. I guess we’ll see.

Sales of my magnets have slowed. Many stores are taking less chances when it comes to possibly offending customers. That’s what they’re telling me. I’ve also fallen behind in promoting them as much as I used to. I feel like I’m falling behind in many different ways.

I try and keep a positive outlook on everything when I write these things, but doing that now would feel bullshitty.

I say all of this in hopes that maybe some of you who’ve been hiding in the woodwork might come forward with something. I really don’t know what I mean at all, but there you have it. An update.