People’ve been demanding I draw celebs that’re more famous. For some reason I have a difficult time focusing on the big stars. In most cases they’ve been drawn 1,000 times already. And they’ve already been substantially over exposed, by definition. Someone however suggested that like the Amy Winehouse piece, I continue with the Gone Too Soon theme. That was a good idea. So as I was searching for ideas I was struck by how few drawings there are of Kurt which actually LOOK like him. Way too many seem to’ve been drawn by a love-struck pre-teen fan, to the point where he looks like the guy from Nickleback! And even more who took the easy route with his shades & sweaters. Anyhow, I’ve done my best to fix that.

Sitting in AC to escape the heat & humidity of Michigan has made August a creatively productive month for me. To begin with, if you haven’t read my most recent stories of my teenage Hollywood Runaway Punkrock Adventure, you simply must. It’s a 3 parter that’ll give insight on how this grownup problem-child started down this path. Depending on how much you REALLY want to know about my motivations, my FBB Girlfriend story, and THAT whole longing obsession, well I wrote about those too. I’m really enjoying this storytelling, and look forward to writing more from my past, and my id. I’ve realized again how revealing myself only widens the scope of art I want to make.

Finally, I’m still in the magnetic Jesus Dressup business! I lost a lot of stores in the pandemic. Many just aren’t even answering their phones anymore. But I have however been getting them onto your refrigerators through my store! I was reminded of how long this has been going on when Sophia, who’s been playing with my Jesus Dressup so long, now her kids play it! Here they are “dressing up the weird guy with holes in his hands.” And that’s a direct quote!
That is one OLD set of the Xmas & the Original. And who else even has a Lady Gaga JDU any more??
Warms my heart, as I hope it does yours as well.

Today I turned 52, and tbh I’m feelin’ old & lonely. I’ve been a single, alone man for many, many years now. Anyone who knows me knows my habit of dwelling on it. Perhaps it’s a midlife crisis? Sure. Why not. My brain dwells and dwells and dwells. Always has. Probably what’s kept me single. But over the years I’ve found several different ways to deal with this issue of mine.

Drawing. Sitting down and focusing my concentration on something I find beautiful has always been the most effective way to distract and refocus this overactive, self-doubting brain of mine. So today (my birthday), in hopes of distracting, I’m gonna tell you about that which I find MOST beautiful, then show you some of my art to prove it.

But before I continue, I hafta acknowledge I’ve struggled on how to write about this. The reality is, I’m just some skinny dude here commenting on women’s bodies. I can clearly see how a blog like this could be taken very wrong. I’m not even convinced I have the right to comment on the topic. I mean, who am I? Who cares what this pencil-neck geek thinks about the bodies of these accomplished  women who know not even of my existence?
I just want to make it absolutely clear the immense respect I have for how much work goes into it. I also understand the amount of criticism and disrespect these women endure. I have no sense of humor about it when jokes are made. They’re as unfunny as they are unoriginal.

It’s these truths behind the muscularity that fuel it deep in me. I adore it as an act of rebellion. A blunt rejection of the norm. A confidence I’ve never been able to find in myself to such a degree. It is also envy, to be sure.
It’s the superiority, intimidation, domination and an exaggerated sexualization that lends itself to the imagination. Fact is, I owe any drawing talent I have to this obsession.

I’ve never seen a woman I thought was too muscular. Any level of visible musculature hits me hard. I have no idea where this came from or how it came about in me. It’s just there, and it’s the one sight that makes my heart jump outta my chest every time.

It can be terrifying too. My emotions are so affected by any encounter. It’s both something I search out, yet dread to find. I lose my cool, and afterwards fall into a despair that haunts me for days to follow. It’s just always seemed so completely out of reach. It’s me at my most pathetic. I have many stories. I could recollect every single muscular woman with whom I’ve ever had an encounter, and my failure as a man immediately after.
You get the picture.

This is Pinky. She’s a character I drew for a website I made in 1997 called Pinky’s Links where I would link up my favorite fbb’s & show off my drawings of them. And it worked! It was my breakthrough in finally finding an avenue to conversing with them online. I drew many of these beautiful women. Some even got their own dressup games!
• Christa Bauch Dressup
• Dressup Tammy Jones

My very first memories of seeing female bodybuilders were televised bodybuilding contests in the 80s, and bodybuilding magazines on shelves. When I was 16 I invented a role-playing game called Palace with more than a hundred characters, most of which were muscular women. I had to make myself draw other kinds of “regular looking” characters so the game wouldn’t look quite so pornographic. The one’s on hole punched line paper were drawn in the classroom. Enjoy!

Happy to say my drawing talent improved over time. In the 90s I started my Neptune comic and created Madonna Brando, my boldest celebration of the extreme muscular physique yet! From left to right you can see how she developed as a character over time.

And to this day I adore the results of what I can do now digitally. I am simply honored to have a way to celebrate it to such a degree at all. It’s my most favorite subject to draw, ever. Clearly.

My plan?
Keep drawing.
That’s all I know to do.
Maybe revealing this about myself in such detail will help. I know there are others. It’s about coming out. Showing proper respects to that which inspires me most.
But after all’s said, Ima prolly shutup and just stick to honoring through art again. I have more practice at that.

The combination of Becka’s art exhibit detailing the last 30 years of my work, and all the free time this isolation in lockdown has forced upon us all, I’ve been re-inspired to archive more of my own history on the internet.

First and foremost, I want to give many thank-you’s to my new friend in Kazakhstan, Aleksei Yu who has a commendable obsession with my dressup games. He singlehandedly scoured the internet & WayBack.com to gather all of the lost and forgotten dressups I’ve constructed over the last 20 years. These were for a wide assortment of clients, most of them having long since disappeared from the web, thus taking their custom games down with them. 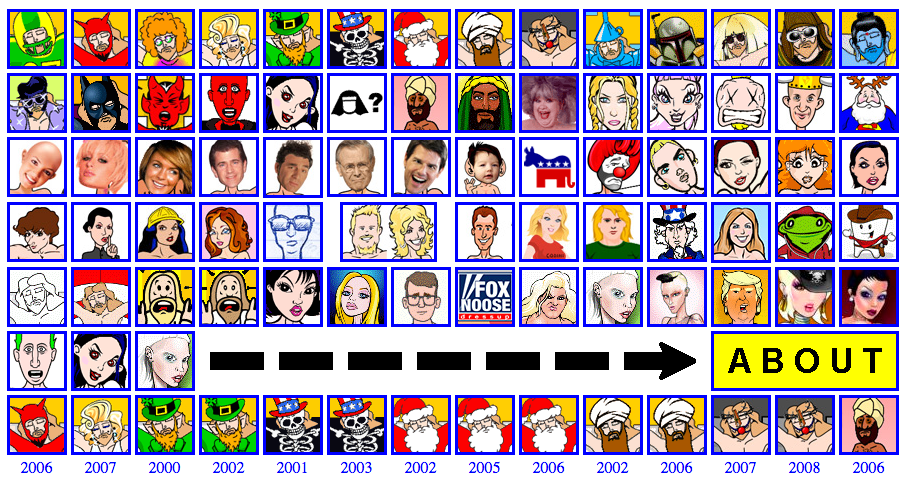 Then he fixed the coding so they work again, organized them by year, and surprised me through email with the full archive for future generations to study and enjoy. It’s simply unbelievable to me. So many of these I’d forgotten about. Over 60 games!
His actions have subsequently inspired me to piece together several other dressups I started, but for one reason or another never completed, like Danni Daniels Dressup! BTW, NSFW!

These too have been included in Becka Jean’s exhibition. In fact each section of her exhibit has been updated with more art, so it’s worth a revisit if you were into it your first time through.

The Jesus Dressup section of my store has also been updated so it’s friendlier to the eye. Things have really slowed down around here, so if you’ve been considering buying these magnets but just haven’t gotten around to it, your purchases won’t be under appreciated. The Halloween sets are on sale for just $10! Only a few more boxes of those left before they’re gone for good.
On this topic of archiving the past, at the bottom of this page I’ve put together this informative gallery of Jesus Dressup magnets produced in order by year. 13 different versions over the last 20 years! It’s worth the scroll through, if only to refresh your memory. 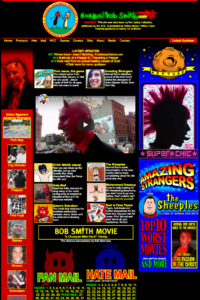 And since we’re going soooooo far down Memory Lane, I’ve also added links in the right side menu here to 3 different versions of my original site as it evolved over the decades. A glimpse back to an internet long gone. If you’re like me and enjoy nostalgia surfing, these are a fun browse too.

This, my friends, is how I’ve been occupying myself here in the middle of nowhere on lockdown, in hopes that it can occupy y’all as well.

Where I’m living now, taking care of the old-folks in Conservative-Baptist-Land I couldn’t feel farther from an audience. It was an extremely good run there. Making my dreams come true whilst getting away with purging all that creativity out of my gut and onto the streets. I mean, looking back, it astounds me the total girth of what I put out, while simultaneously paying NYC rents. But “looking back” seemed to be the extent of all that remained. Now I’m 50, and the rules say, my time has passed.

When Rebecca got in touch with me last year she suggested maybe I do indeed deserve to be noticed? Still?
In fact, she was going to write her final thesis on me and this body of work. Now here we are, a year later sharing all of this again with a new audience. I could not be more happy or fulfilled as an artist by this acknowledgement. 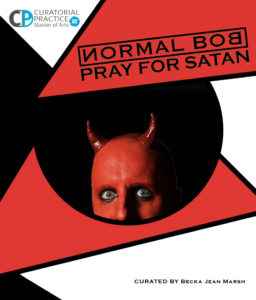 The “Normal Bob/Pray For Satan” exhibit brought to you by Becka Jean Marsh is a collection of favorites from 4 bodies of my work over the last 30 years.

This is the first time ever I’ve put out on display my entire Neptune collection. Ev-verrr.

In addition, it’s the first time I myself have ever put them in storied order to read as they were meant to be read! It wasn’t until clearly seeing them this way I realized it’s the illustrated emptiness I felt from a vanishing faith. It’s what I feared was on the other side. My prelude to atheism. It was quite the epiphany.

I still have no idea where I’m headed from here, but whatever happens I’m happy to still be of some consequence. Thanks Becka. Hopefully we can still make a real gallery exhibit happen in NYC one day in the future.

Her entire thesis can be viewed here, and it’s an incredible account of my life and how everything went down for me and my art. I just could not be more flattered and inspired by the words she’s written. Thank you Rebecca.

And look at that. The tux still fits!