Spring truly sprang yesterday when Wendell had his hat swiped off the top of his head by some crazy kid. And he seriously WOULD NOT give it back!

He taunted Wendell, and everybody else, kicking it around with the whole park chasing him. I was shocked when Wendell somehow found a way to snag the kid’s wallet. That’s when the true standoff ensued.

But wait, this is New York City, so of course a marching band comes right into the middle of the chaos, and the hat thief starts it in with them too. Kicking their money jar halfway across the park, he showed off both his complete lack of regard for anything, as well as some killer dance moves.

Anyhow, the last we saw of the hat thief was the girl who was crouched, speaking with him earlier in the video walked him away from the park. There was no sign of him for the rest of the evening. It was a wacky afternoon at the Square to be sure! Also, here are some other photos taken from that same beautiful day.

We’re almost completely back. There’s been a few tolerable days at the park between 45 and 50 something degrees. Some footage has been shot, and almost everyone’s falling back into their designated compartments, waiting. Impatiently waiting. You can see it in their eyes. Signs grumbling through his routine not quite spritely enough to be smacking me on the back of my head and calling me a dildo butt. Roman is lurking around, but ducking out of my camera’s view. Jeremy’s annual promise that this is the last year he’ll be doing Free Hugs. Matty Ice is dizzily wobbling around in his oversized winter coat. Even Qween Amor stopped by to chat a bit. No sign of Wendell yet. The first Wendell sighting is when it’s official.

For a few years now I’ve been trying to figure out a better symbol for Amazing Strangers other than that Coney Island-like face. For some reason it was a puzzle that confounded me for a long time. What face or image sums up the Square? Then, a week or so ago it hit me. Just before I was drifting asleep, I had an epiphany. And it was Wendell. Wendell is obviously the face of Union Square! It took some time to figure out how exactly to draw that trademark hat of his, but eventually I nailed it.
The new face of Amazing Strangers. I hope he’s alright with it.

Speaking of which, I’ve also been getting inquaries from you people asking how it might be possible to donate money to specific Union Square Strangers. And I’ll tell you what won’t work. Giving me money to pass on to them. I can’t imagine what my life, the videos, and a day at the park would become if I turned into the guy for them to come to for dough. And I can’t imagine there’s any sort of charity specifically pertaining to Union residents. However, if you’ve got a workable solution, I’m open. Until then the best I can tell you is to go to Union and hand it to them yourself.

If you haven’t seen the documentary I was in from 2004 “Bob Smith USA,” Neil Abramson (the director) has set up a place on Vimeo where you can watch for just $1! It’s hilarious, and strongly recommended viewing.

Right now I am at Astor Place Starbucks. It’s pouring rain outside. I’ve been doing some art. This lovable picture of my friend Sasha is some proof of that. And just like everybody else mentioned above, I too am in limbo. Impatiently waiting.
And we wait.

Quite simply, things have gotten very stupid and strange at the park. And if one more person comes up to me and says “I know I asked to be on your site, but could you take me off now?” I’m going to throw them the fuck out of the whole goddamned park!

Loads more Hate Mail, and the latest on what’s been going on. Btw… where’s Muhammad Dress Up gone? And, is that Wendell? 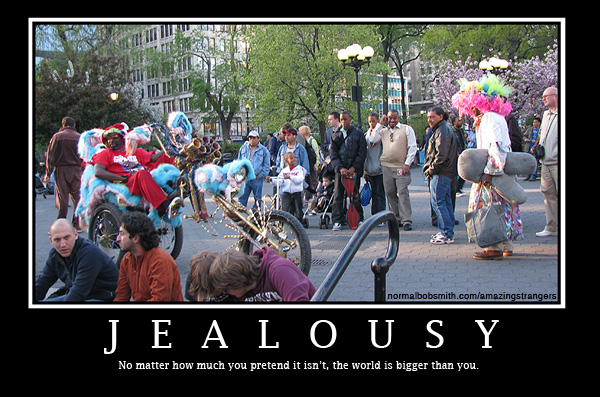