It’s that time again when I haven’t updated long enough to finally get an email asking if I’m still doing the site and/or selling Jesus Dressup magnets. The answer’s yes. Plus I’m also selling Trumps & Mohammeds as well. Can you think of anywhere else that combo of themes is available??

In total I have 8 different sets of magnetic dressups available all to be shipped in time for the holidays. Be warned- I’m opening my final box of Lady Gaga Jesus Dressups (40 sets per box). So get yours now, because those won’t be printed ever again.

At the moment I believe I’ve posted the last Amazing Strangers video for a while. You can see all of  the latest ones there in the right sidebar. There comes a time when I just can’t seem to find anything worthwhile enough to edit. But that could change at any point because I am indeed working through all those folders preparing a paperback book which’ll be stories & art, but mostly photos of Union Square Amazing Strangers.
My local bookstore/coffee shop Book Nook has offered to print it up for me through their publishing company, West Vine Press here in Whitehall. Then later this winter I’m planning to host video presentations here at the shop. We’ll see how that goes. I’ll be sure to make the book available for purchase here on the site.

I’ve yet to get any offers on a place to stay in NYC to encourage more frequent visits. But I do have a friend willing to rent me a room for a month in May. If it’s still available to me by then I’ll be taking her up on the offer. That’s when you can expect brand new, current footage added to youtube.com/normalbobnyc.

In other interesting Amazing Strangers news, my friend Nick (New York Nico) back in 2014 purchased one of Roman’s signs for a dollar, and has since had it framed! It’s now hanging in his hallway, and I thought you all might like to let your envious eyes lay upon this lovely piece of art.

There’s a video getting a lot of attention right now on YouTube of several young guys getting kicked off a plane for speaking Arabic. The video is short, of a guy yelling into his camera phone about how he and his buddies are being booted for speaking a foreign language while he was on the phone with his mother, and chastising white people on the flight for letting the toss-off happen. CBSN described Adam Saleh as a “YouTube star kicked off Delta.” And that he most certainly is. You see, I have a history with Adam Saleh and his “True Story ASA” gang, and now seems like as good a time as any to share with you who they are and what it is they’re doing.

I had been documenting Union Square Park in NYC for the last decade or so, and 2014 – ’15 I would see them there trying to bait people in one way or another. For instance, trying to get New Yorkers to complain about a Muslim praying in public. 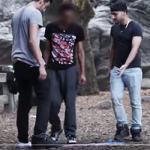 They’d lay out a rug and pray on the park path, but no one cared. So they’d have one of their friends try and drag people over saying “Yo, you gonna let him pray like this? It’s mad disrespectful, right?” and still people wouldn’t jump on board with the enthusiasm they needed for a video. The last resort was having a friend pretend to be offended and complaining, blur out his face, call it a real passer-by, and there’s your video. It’s shameful and cringe-worthy, and not very hard to figure out if you’ve got even an average eye for social studies. 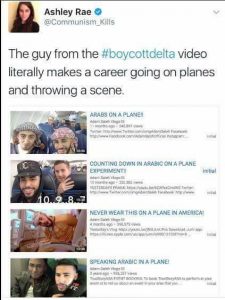 Immediately when I first started seeing this “Kicked off Delta” story circulating through my Facebook feed I knew that they’d gone and done it again. I wasn’t even aware (until now) they’d already posted videos of themselves causing this kind of trouble on planes before. In the past they’ve recorded themselves counting down from 10 to 1 in Arabic loud enough for everyone on the plane to hear, and laughing while they did it. Yes, Adam is this type of guy. He needs this sort of attention. And his YouTube channel, with over a million and a half subscribers, is audience. As a videographer myself I understand the pressure to get material for a YouTube channel. I understand the urge to make something happen when nothing’s happening. And it’s clear Adam has embraced this method without regard for his own reputation, or the reps of his If-he-jumps-off-a-cliff-so-will-I friends. The host of WeAreChange did a better job of illustrating this in a video than I ever could.

I have a history with Adam Saleh and his True Story ASA gang. They got involved in my Union Square footage when my friend Joey Boots was yelling at a lady wearing fur. That video gets pretty obnoxious, but it was my introduction to these guy’s faces. That’s when Joey and I both started looking through their videos and discovering what frauds they actually are.

When I first posted my video with Joey Boots criticizing them and their methods, they immediately flagged it and got it taken down. I had a back and forth with their “legal rep” (I posted the entire exchange on Reddit), but in short their defense was that I didn’t ask permission to use their clips in my critique of them. Of course I am allowed to do that without permission, so eventually they gave up and the video remains. It’s an amusing exchange if you need a good laugh, or want some insight into their mindset.

They’re clumsy with the amount of incriminating information they leave out there, terrible actors, and no shame at all when it comes to seeking out creative ways to look victimized. I think that’s what disgusts me the most about them. So when they’re pretending things like being arrested for being Muslim, or his embarrassing fake crying, it comes off like kids playing make-believe (which is exactly what it is, I suppose).

Watching their videos, seeing them around the Square all the time, and my direct encounters with them, I can assure you these are not a group of guys you want to trust. They’re pranksters, which is not a bad thing, but they’re also liars & con men, which is. They don’t understand how playing these sorts of games & getting caught hurts the credibility of those who really are victimized in real situations.

I have a hard time picturing how this won’t come back and bite them in the ass in some way or another. Especially now with them pranking the airline industry with terrorist jokes. They’re really just a bunch of obnoxious, unsupervised kids with a popular YouTube channel, but this time they may have bitten off more than they know.

It seems even when I’m far far away the Amazing Strangers continue on with their lives, and the drama of Union Square moves forward without even the slightest bit of nudging from yours truly.
Last Christmas I got a distressed email from the one and only Jolly Cat himself accusing me of slander for the videos I’d been posting of him over the years. He emailed me years prior about removing them and I politely obliged. But then he kept showing back up at the park and doing the exact same show for us again and again! So I put them back up.  Then finally,  back in December he sent me another email, and it went something exactly like this:

In response to this I decided that the videos weren’t all that important to me, so I took them down and replied:

Despite all of this I granted his request.
Now, 6 months later, what do I see? Jolly Cat performing his trademarked act on America’s Got Talent with exactly the same results I witnessed every single time at the park. And here is that amazing video.

The way I found out about this AGT video was Shaggy calling me up frantically asking “Where are all your Hat in the Cat videos?!? I can’t find them!”

After explaining why I took them down Shaggy showed me Jolly Cat’s television debut. My jaw dropped, and then I put them all back up again.

I’m sure I’ll probably hear from him again, but none of what I filmed was edited or taken out of context. It’s what Shaggy, I and many others had to bare witness to when he chose to perform in front of us. So with great pleasure I bring you back to the Original Hat in the Cat, more famously known as “Jolly Cat” as we all know him from Union Square NYC!

And to Jolly Cat – I think the burden is on you (or better yet, your manager) to produce and distribute video of you making people laugh. It is not my responsibility. I mean, if I do not witness it, it is impossible for me to film it. Right? And portraying your show as something other than what I see would be committing High Perjury! Then I’d have to let my manager know about this so he could contact your manager about taking the next steps in regards to all of this. Anyhow I’m also happy to promote the video you asked me to promote in this video.

Jolly Cat’s “A Wacky Love Story” feature he promoted in the previous video.

And this is the first time I ever saw and recorded Jolly Cat back in Feb 2009.