If it’s not depression, I’m sittin’ on the edge of that cliff. I knew when I moved here 6 years ago that any hopes of having local friends, relationships or a social life of any kind were over. A 50+ single, childless, god-mocking Gen-Xer caring for his elderly parents in conservative-Bible-land during a pandemic has an extremely predictable plotline. I get it. And I don’t see any way others can help me through either. I don’t need an ear listening to my complaints. I know people love and care for me. Over here, men with these issues are on their own. And for the love of god, please stop suggesting I try joining a singles dating site. The suggestion itself is more painful than actually writing a bio for one. Thank you. I get it. But no.

I’ve also recently noticed that I’m audibly sighing now, regularly. Involuntary deep breaths followed by sad painful exhales. I try to divert it by turning it into talking to the dog, or myself, or singing to the radio. It’s a pathetic scene here, man. I’m pretty sure I’m able to keep it quiet enough when I’m out, but alone in my car it’s sickening! This fear of being a single man free of love from here on out has haunted me my whole life. And worse yet, it’s looking to be a self-fulfilling prophesy.
God, I’m  lonely.

So ANY-HOW, I’m handling this situation the only way I know. The only way I’ve ever known. I gather up my pencils, pens, sketchbook and my +3.00 reading glasses and head to a coffee shop and draw until they tell me to leave. Point my nose at a page and induce the only kind of focus capable of   blocking out the endless loop of all these thoughts through my simple mind.

Outside of this drawing-focus I’m completely scattered. I can hardly organize my thoughts enough to explain myself here even. And in the end it’s most likely a waste of time to do so anyhow since everyone’s going through their own version of this right now. Everyone’s yearning for help, answers, relief, care, love.
Jesus Christ.

As always, your interest is greatly appreciated.

Wow, Joy! I’m curious what exactly inspired you to write me now? Thank you so much. It does mean a lot to me to hear I made a difference. I have to admit I feel like I’ve been out of the game since I left NYC in 2015. Then add on the pandemic and middle of winter… I feel in limbo.

Do you remember how you first came across the site?
Normal Bob

I really appreciate you letting me in on all these personal details. And I have indeed continued to express myself however I see fit despite it not being as popular as what used to be. I’m doing my best to continue whatever dream it is I have for my future while being as authentic as possible.

Would you be alright with me posting this conversation along with a picture of you (if that’s ok)? I think it’d interest people. I’d also be happy to send you a set of Jesus Dressup magnets, if only as a reminder on your fridge that it’s all to be laughed at.
Thank you!
Normal Bob

For those of you who aren’t aware, I’m now living in Michigan, at my parent’s house on a lake, helping them as they both turn 90 in the next coupla years. I have a beautiful view of it out my bedroom window, only now it’s ice!

It’s about 1 mile lengthwise and a half a mile across from where we are to the opposite side. Yesterday my cousin was out ice fishing, so I grabbed my camera and the dog and went to say hello. I recorded my walk there with Shotzi sticking close because the ice boosts her sense of nervousness. Not mine though! In the summertime my dad offers $50 to any of the grandkids skilled enough to swim the half mile stretch. It’s a tradition each grandfather who’s lived here has offered. I’ve never swum across and gotten that $50 because I’m not the best swimmer. So I thought instead it’d be something to say I was the first one to walk it!

I periodically would turn on the camera and describe the situation, then switch it off again because my hands would get too cold. I didn’t bring gloves. It’s impossible to operate the camera with them.

As I got almost to the other side I remember saying, “I don’t think it’s official until I touch land!” And no memory of whether or not I switched it off as I approached those next couple steps. That’s when the ice gave way right out from under me. As my body dropped my very first thought was, “Oh God, it broke!” and I was now up to my shoulders in the lake, camera completely submerged. My head never went under. I remember raising my camera out and sliding it out on the ice in front of me. Shotzi was still trotting about, now in front of my face trying to figure out what was happening.

I tried grabbing at ice in front of me and it broke away. Then grabbed at the ice to my left and it broke away. “I’m in trouble! This is serious! I’m all alone!” I shouted, or thought very loudly. Then I remembered what to do. “Spread your weight!”

I spread out my arms, laid them on the ice to my right and I pulled myself up on onto it on my belly like a seal. I continued to drag myself a couple more feet, completely soaked. My heavy winter jacket, and all my clothes were now a 20 pound wet sponge on me. I stood and quickly started my panicked cold, wet walk back to the house.

“I need to get inside and dry ASAP! Are you with me Shots?” is the sentence I repeated about 40 times the whole trek back with the doggy at my feet. Thank god she didn’t fall in too! One of the scariest moments to follow was hearing ice crack again while walking back, realizing I weighed a lot more. I was soaked through my winter coat, my hoodie and my thermal shirt under that, as well as my pants, long johns, wool socks and boots.

Anyhow, I got home safely, into dry clothes and I actually poured water out of my boots! Then told the story many times sorting out how it all went down to my folks, my aunt, my cousin, and myself. My camera is presently buried in rice in a box. This is the second camera I’ve dropped in that stupid lake! I don’t plan to see how it’s doing until next week sometime. I’ll let you know if any quality footage remains.

My dad fell through the ice as a kid and he told me “Be prepared to not being able to sleep tonight because you’re running the story through your head again and again because that’s what happened to me.”

I told him I don’t think I’d be as affected as he was as a kid. I’ve had multiple dangerous things happen to me in my 50 years, so I probably wouldn’t have that experience. I was wrong. Last night I tossed and turned thinking about that black hole I fell into, and how lucky I am the dog didn’t fall in with me, imagining all the different outcomes. And today my body aches. My joints are tired and I’m delighted all I have to do today is watch the Packer game and eat pizza with my dad while the snow falls and covers the hole I made in the lake yesterday.

I ain’t gonna lie. I’m starving for human interaction, and public settings, and human interactions in public settings. The potential for human interaction in public settings is where I relax and concentrate best. Sitting in coffee shops with my sketchbook is how this used to happen. I’ve also discovered that sitting alone in a room with my brain being the only thing telling me what I can and cannot do isn’t cuttin’ it. My brain, it seems, has been molded specifically to know exactly what to say to discourage creativity and confidence in myself. It’s only been other people that’re able to counter these voices. But that’s where we are right now. So to celebrate this fun fact of my brain’s self-destructive goals from now until Xmas every order going out gets extras, because fuck it.

Whether it’s just one postcard, or all 6 Jesus Dressups for $66! In an effort to spread even more smiles across the globe during this stupid pandemic I’m giving freebies of my choosing to all who buy stuff. My hope is that some sorta magic karma or some-shit’ll come back at me and we’ll all have a Merry Christmas!

I’ve got an illustrated poem book and signed art prints, which btw, if there’s any piece of my art anywhere you’d like signed and hanging on your wall I’ll supply it. I have an entire store of stuff I’d love to send you all. Please consider this! 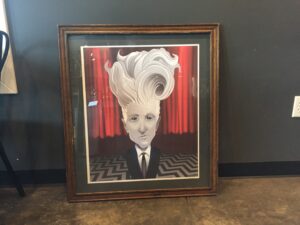 When I can FINALLY go out to draw to build my confidence again you can go see it on the walls of the Drip Drop Drink Cafe in Muskegon. I have this new David Lynch piece hanging there on display (with several others) that you hafta see! But until then I suppose I just need to fortify my patience more.

Thank you for your concern.